One of the perks of being a media professional is that you get to meet some wonderful people on the way. But there are very few who motivate you to become a better version of yourself. Sarah Kashyap is one of those who has left a lasting impression on me.

A biker, a dreamer, a traveler – That’s Sarah in a nutshell!

I first met her when she was conducting a riders’ training program. Back then, she was part of the Rides and Community team at Royal Enfield. Sarah was instrumental in training a bunch of newbies, mostly women, on how to ride a motorcycle in a couple of days.

She said, “It’s just a mindset. I’ve met women who fancied being on a Royal Enfield but were told by their peers that a bike is too heavy to handle. If taught properly, women can ride a bike in one day. This is what happens at the Royal Enfield Riding School.” 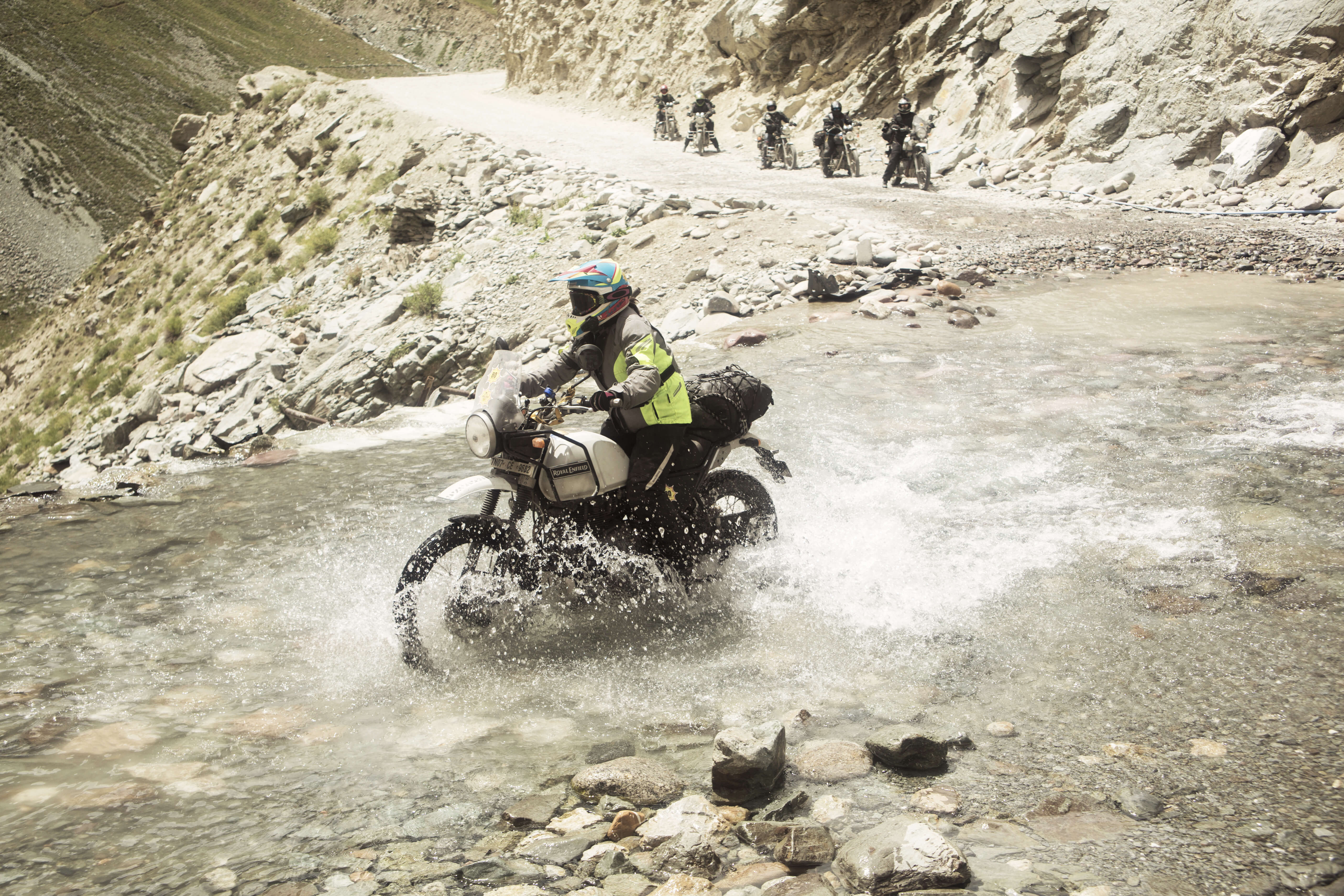 Sarah has been on the motorsport circuit for a few years now and has won many accolades. In January this year, she became the only woman to have successfully completed ‘The Maruti Suzuki Desert Storm Rally’, which was initiated back in 2003.

She says, “This is a 6-day race and no woman has completed the rally until now. I just wanted to prove that women can ride in the desert as well.”

Sarah Kashyap is also the proud holder of three ‘Coupe De Dames’ Trophies for some of the biggest motorcycling rallies in the country – Raid de Himalaya, Desert storm, and SJOBA. Having proved her mettle time and again; Sarah is one of the top women motorcyclists in India. And we couldn’t be more proud.

But before we celebrate her achievements, let’s get to know this rising star’s journey. Born and brought up in Chandigarh, Sarah learned how to ride a Bajaj Chetak Scooter as a teenager.

Her father said, “If you learn how to ride this, you’ll be able to ride any other two-wheeler.”

Soon after, her brother bought a motorcycle and Sarah took up the challenge of riding that mean machine by merely taking tips from her sibling.  She started riding to college and welcomed all the attention she received with open arms.

She admits, “At first, I loved the idea of wind blowing in my hair. I enjoyed being a petite girl who had mastered the art of riding.”

After Sarah completed her graduation, she decided to go to England and pursue MBA in Banking and Finance. But after the course, she didn’t find a full-time job due to the ongoing credit crisis. Leaving no stone unturned to fend for herself, she took up all sorts of odd jobs to make a buck.

READ  From a disastrous entrepreneurial debut at selling soaps to leading Reliance Industries, here's the story of Parimal Nathwani

From selling newspapers to working at a Pakistani Halal shop to volunteering at old age homes, Sarah has done it all! But what’s closest to her heart is being a caregiver for a person suffering from cerebral palsy.

She says, “The fondest memory I have is working for Tony, an 80-year-old man in a wheelchair. His condition didn’t stop him from getting an honorary doctorate. He was a wise and hilarious person who inspired me at levels I cannot explain.” 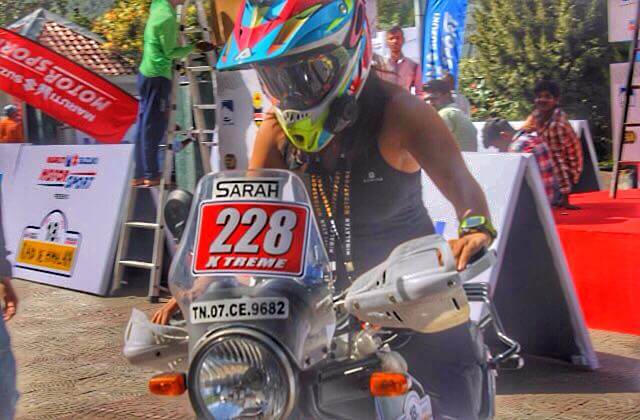 Sarah then landed a job at Google. Having lived overseas for almost six years, it was time for her to return. The reason? She came back to India to get married. Unfortunately, destiny had other plans for this maverick. The groom’s family demanded dowry and Sarah couldn’t allow that. She called off the wedding.

She says, “I am very fortunate to have understanding parents. My father told me that it’s better to not get married than being unhappily married.” She adds, “This is the first time I’m revealing this to a journalist. I am finally at a place where I can be open about this. I hold no grudges.”

When I asked her how she dealt with the break-up, she says, “My suggestion to all the broken-hearted would be to invest in themselves. Get up at 4 AM and do 100 push ups! You’ll feel much better.”

After a hearty laugh, she tells me that she enrolled for a leisure tour in Rajasthan to slip away from reality and gain new experiences. Needless to say, she went on her motorbike, a Royal Enfield thunderbird 350. That’s where she got her next job offer – from a digital media company which was covering this leisure rally.

She moved to Bengaluru for this job and rode her bike, named Hercules, to explore scenic parts of the city. By now, riding had become her passion and Hercules her best friend. So much so, that she decided to travel to Ladakh on her bike to ring in her 29th birthday.

She says, “I knew the journey would be challenging and I’d be traveling alone on a new terrain but I was very positive that I’ll meet some amazing people on the way.”

Fearless and adventurous, she traveled solo, gained surreal experiences like camping on the bank of Pangong lake and rode tirelessly.

After she was back, Sarah crossed paths with a senior manager at Royal Enfield and she now had a job with her dream company in Chennai. It was in this southern city that she made a very dramatic decision. She decided to let go of her rented apartment and get back the security deposit to fund her participation in the ‘Raid De Himalaya’ rally.

She says, “Motorsport is an expensive affair. It costs about 2 lakh rupees on an average on the preparation, commute, and accommodation. I did what I had to.”

Sarah makes you believe that making excuses is just lame. You got to do what you want to. Today, Sarah is a sponsored athlete and is heading Maxride Racing.

She says, “Motorcycling is a great sport for women as it requires a lot of discipline and fearlessness.”

Her next big rally is the Indian Baja in April 2017 and we wish her nothing but the best!

Sarah Kashyap has broken stereotypes and carved a name for herself in an essentially male-dominated sport. Her undying spirit and utmost conviction have helped her conquer her fears and tread the path of success. Sarah signs off with,

With these words, she leaves me with a desire to do much more and break the shackles that hold me back.

Do you think you have a story or came across one that could inspire several out there? Email us on [email protected] or join us on Facebook, Instagram(@chaaipani) and Twitter (@chaaipani). To get inspiring stories on WhatsApp, just drop your number here. Don’t forget to subscribe to our strictly no-spam e-mail newsletter to brighten up your inbox!

I have been a Features' Producer with Times Now for more than five and a half years. I like to call myself a storyteller. My beat is unconventional - human interest stories that touch the heart. I am a little mad but a lot of fun.

I have been a Features' Producer with Times Now for more than five and a half years. I like to call myself a storyteller. My beat is unconventional - human interest stories that touch the heart. I am a little mad but a lot of fun.

Indian traveller shares how this city in U.S. is dissolving cultural differences, one guest at a time

Bengaluru’s suburban rail- A reason to rejoice or election gimmick?

Story of Ekta – Bubbly, Punjabi kid to one of the chirpiest Radio Jockeys of Gujarat

Brazil declares the end of Zika emergency. Here’s what it means.